A multicenter, randomized-controlled trial and cost-effectiveness analysis. Pancreatitis is the most frequent complication due to ERCP. Pancreatic duct stent placement has been described as a preventive measure. There is also evidence pointing towards the preventive effect that early precut may provide.

Patients with a difficult biliary cannulation and at least one other risk factor for post-ERCP pancreatitis were enrolled and randomized to one of the treatment arms.

Both effectiveness and costs of the procedures and their complications were analyzed and compared. 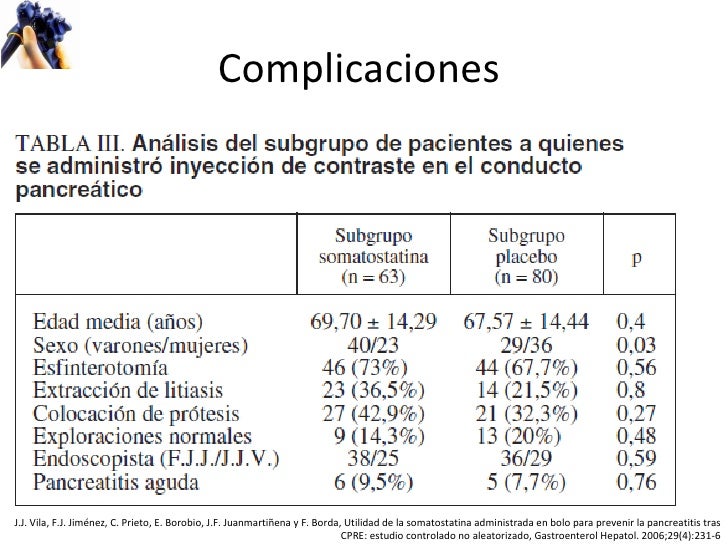 From November to Novemberpatients were enrolled; 50 subjects were assigned to group A and 51 to group B. Lost were no significant differences in terms of baseline characteristics of patients between groups. Two cases of mild pancreatitis were observed in each group. The cost in group B was Early precut showed a better cost-effectiveness profile when compared to pancreatic duct stent placement.

There have been several lines of investigation related to PEP prevention.

There are several pharmacologic agents that were tested for this purpose, most of them showing disappointing results, except for rectal indomethacin or diclofenac 5. On the other hand, pancreatic duct stent deployment during ERCP in high-risk subjects has been proposed as an effective prophylactic measure A meta-analysis published by Mazaki et al. A cost-effectiveness analysis of pancreatic duct stent placement regarding prevention of PEP showed that this approach exhibited a good cost-effectiveness profile only when considering high-risk patients Patients with difficult biliary cannulation constitute a group with a significant risk for the development of PEP.

Precut sphincterotomy is a technique that can be used in this endoscopic scenario, but has been associated with a non-negligible incidence of adverse events 16, Some authors suggest that the complications following precut sphincterotomy especially PEP may be due to papillary trauma as a result of multiple attempts to cannulate the biliary duct or due to the involuntary cannulation of the pancreatic duct This raised the hypothesis that early precut may even act as a potential prophylactic measure against PEP in patients with a difficult biliary cannulation 17,19, To our knowledge, there is only one published trial comparing early precut versus pancreatic duct stent placement as PEP prophylactic measures This trial showed that early precut was non-inferior to pancreatic duct stent for this purpose.

There are no published studies assessing the comparative cost-effectiveness of both techniques in high-risk patients presenting with difficult biliary cannulation. Hence, we sought to determine the cost-effectiveness of the aforementioned techniques in the setting of high-risk patients undergoing ERCP with difficult biliary cannulation.

This was a multicenter, prospective, randomized-controlled pilot study, with cost-effectiveness analysis comparing the use of the early precut technique versus pancreatic duct stent placement for the prevention of PEP in high-risk subjects with a difficult biliary cannulation. Enrolled patients were randomized into the following treatment arms: This study was undertaken in two public tertiary referral centers in the Buenos Aires metropolitan area between November and November Patients with previous sphincterotomy, coagulation disorders, altered bilio-pancreatic anatomy or those unavailable for further follow up were excluded.

Early precut sphincterotomy was performed immediately after randomization. Late precut was performed after eight minutes of attempting a biliary cannulation. All the enrolled subjects signed an informed consent.

The study protocol was approved by the Ethics Committees at both institutions and all investigators were committed to follow the Ethics recommendations described in the Declaration of Helsinki of reviewed in Patients were sedated using fentanil, propofol and succinicoline; orotracheal intubation was used in every case.

If eligibility criteria were fulfilled, patients were randomized during the ERCP into one of the following treatment arms: The endoscopist in each case chose the most appropriate precut technique to be performed: Sphyncterotomies as well as precut sphyncterotomies were performed with an electrosurgical source Emed ES using pure cut mode at 50 W.

After the ERCP procedure, patients were admitted to the hospital for 24 hours. After discharge, they were controlled in the outpatient clinic or by telephone contact a week later. Those patients with pancreatic duct stent placement were evaluated with abdominal x-rays to check for stent migration. In case of stent persistence, these would be endoscopically removed.

The severity of these adverse events are further described in table I. For this variable the following aspects were estimated: Table II describes the aforementioned costs.

It is worth mentioning that in our healthcare system, the costs related poet ERCP with anesthesia support include all the necessary materials for the procedure except for metallic or plastic stents and balloons.

A centrally-generated, computer based simple randomization was performed. This was done by means of the Research Randomizer software.

The randomization list was uploaded to the web so that it was readily available for the allocation of patients at both institutions. Epi Info version 3. Categorical variables were compared using the Chi-squared test or Fisher’s test, when appropriate. 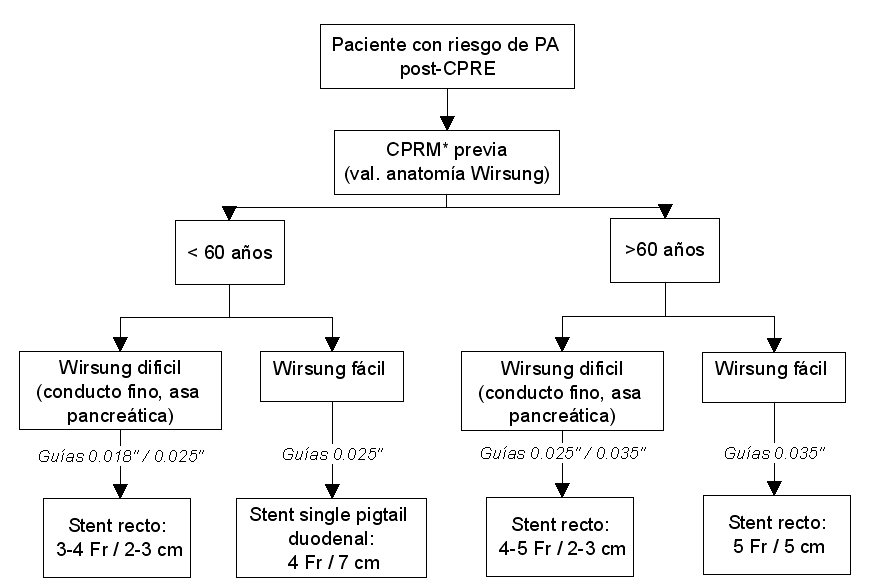 We initially screened patients who fulfilled the inclusion criteria, but only patients signed the informed consent and, consequently, were enrolled in the study.

Fifty patients were randomized to the early precut group and 51 to the pancreatic duct stent group. There were no significant differences in terms of demographic features, reason for referral or PEP risk factors between groups, as seen in table III. The three patients in which initial biliary cannulation was not achieved were subject to a subsequent endoscopic intervention that proved to be successful in every case.

The latter procedures were also contemplated in the overall costs of each group. All the enrolled patients had their biliary condition resolved endoscopically.

Although these perforations were not directly related to the precut procedure, we included the costs derived from the care of such cases in our cost-effectiveness analyses. This estimation does not include the cost related to the cases of biliary perforations mentioned previously: If the latter were included, the difference was still significantly different: The hypothesis that PEP in patients with a difficult biliary cannulation in which precut sphyncterotomy is used could actually be caused by the papillary edema due to the numerous attempts of cannulation was proposed by the study published by Zagalsky et al.

This study actually suggests that early precut is not inferior to what is considered to be the “gold-standard” in terms of PEP prophylaxis, that is to say pancreatic duct stent placement. Based on these findings, our study aimed to analyze both approaches for high-risk patients from a cost-effectiveness point of view.

The meta-analysis published by Cennamo et al. It is very likely that the trauma originated due to the persistence of cannulation by a conventional method and the number of involuntary cannulations, or even contrast injections in the pancreatic duct, could be responsible for the increased risk of PEP On the other hand, Mazaki et al.

In the study published by Das et al. Our study compared an early precut approach versus pancreatic duct stent in high-risk patients; we found no significant differences in the incidence of PEP. Additionally, although ckmplicaciones differences were found in terms of preventive efficacy among high-risk patients, we found significant differences in the costs of each approach. To our knowledge, this is the first cost-effectiveness study comparing both techniques.

In the pancreatic duct stent group the higher costs can be explained by the inherent costs of the pancreatic stents, the follow up to check if spontaneous dislodgement vpre the stent has occurred and the endoscopic procedures for stent retrieval. It is worth mentioning that in the early precut group, two perforations occurred that did not have a direct association with precut sphincterotomy; even so, if the costs generated by the medical treatment of such complications hospital admission, antibiotic therapy, CT scans are also included compliccaciones the analysis, early precut is still a more suitable approach from a cost-effectiveness perspective.

The limitations should be mentioned. First of all, the relatively small sample size of enrolled patients posst underestimate the true incidence of complications; however, there is no tendency towards any difference between both approaches.

On the other hand, the costs of procedures, materials and hospital admissions were based on the references provided by public hospitals; plst differences may exist if we consider private hospitals’ costs. It is important to stress that this was a multicenter, randomized controlled trial in a high-risk population.

In conclusion, both early precut and pancreatic duct stent placement seem to behave in a similar way as preventive measures against PEP in high-risk patients with a difficult biliary cannulation.

Risk factors for complications after ERCP: A multivariate analysis of 11, procedures over 12 years. Major early complications from diagnostic and therapeutic ERCP: A prospective multicenter study.